Share
Ken Ludwig’s Treasure Island is an action-packed adventure that follows the young and courageous Jim Hawkins on an epic, high seas voyage. Accompanied by friends and a band of cutthroat pirates (including the fearsome Long John Silver), Jim encounters treachery and mutiny lurking around every corner.

Treasure Island takes place in 1774, only a few years past what historians call “the golden age of pirates,” which lasted from the early 1700s until the 1740s. We follow Jim from his home in Bristol, England, to the deck of the Hispaniola, all the way to exotic islands in the Caribbean Sea. In the Playhouse’s production, the set transforms into each of the locales, sparing no details by way of props and scenery. See how our craftsmen and artisans built the elements that brought this extravagant world to life on the Marx stage. 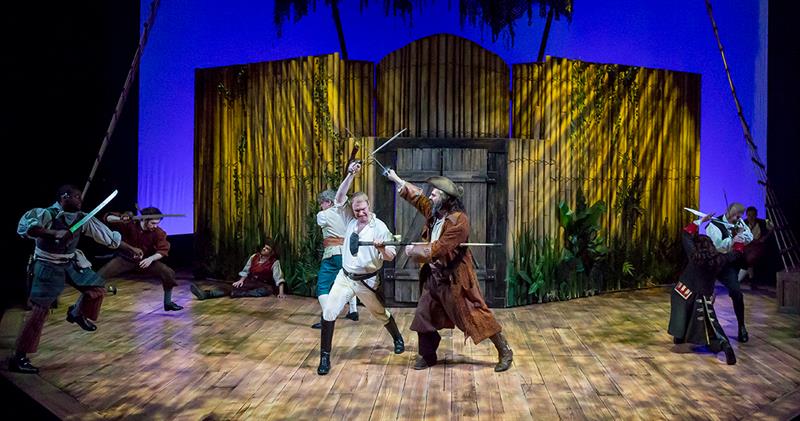 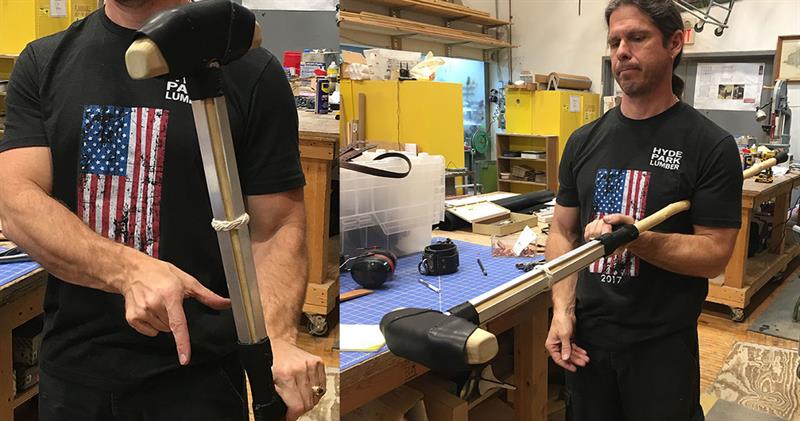 Playhouse Props Assistant Scott Hubert worked closely with Fight Choreographer Drew Fracher to build a crutch for Long John Silver that would add a unique edge to the character’s fighting abilities. Hubert and Fracher created the possibility of turning Silver’s disability into an advantage, since the character relies on a crutch to walk. Knowing that a wooden crutch wouldn’t last long against swordplay, Hubert attached metal langets near the top of the crutch so that it could parry sword blows.

“It’s really a great prop,” Fracher said. “My favorite moves in the show are probably stuff that happens with the crutch. Silver hits people, he punches people with it, he blocks attacks with it. He attacks with it himself, he does swipes." 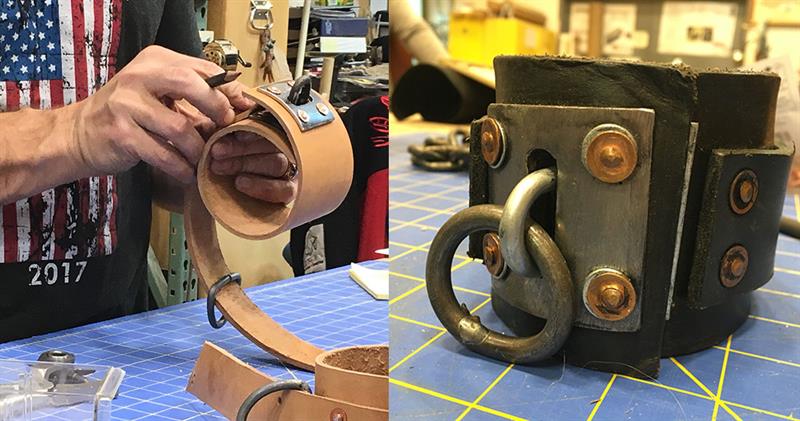 The steel, chain-linked handcuffs in Treasure Island were repurposed from the properties’ back stock, which holds thousands of items seen on the Marx and Shelterhouse stages over the years. Hubert, seen here working closely with the prop, said that these handcuffs were created for the 2012 production of The Three Musketeers. They used a carabiner between the chain lock and the cuff to make them more functional for the actors. 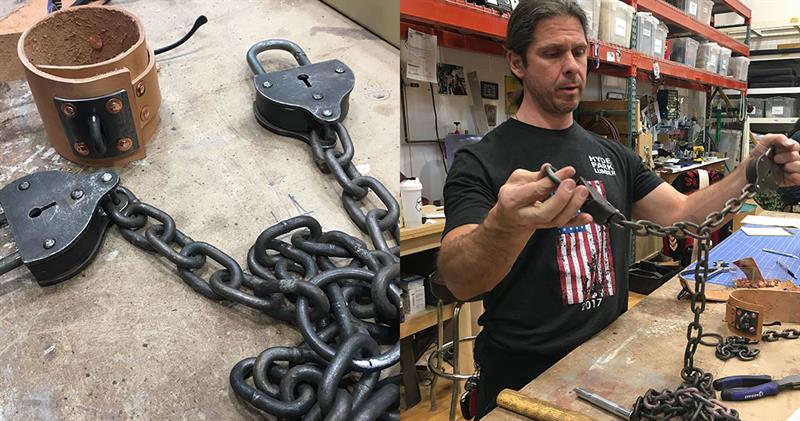 Before rehearsals began, Hubert and Fracher discussed how to update the handcuffs for Treasure Island. Although they didn’t yet know what action the actor would perform while wearing them, they decided that the handcuffs needed to be shaped into a T and that the actor would be likely be stationary while wearing them. Hubert explained that the T shape gives Fracher and the actor the more options for movement during the rehearsal process. 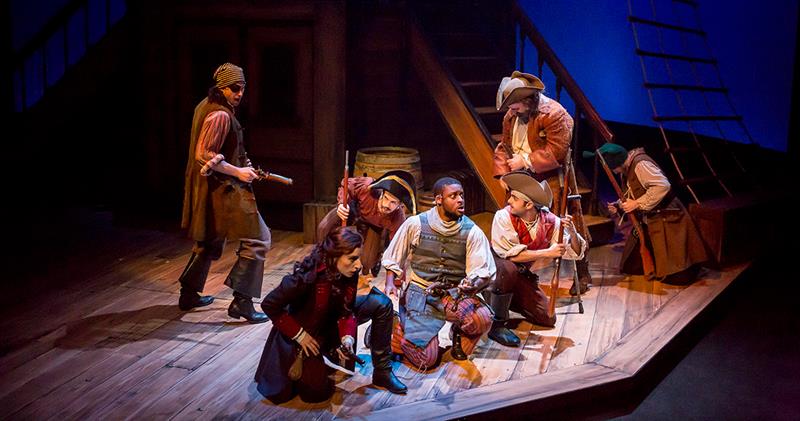 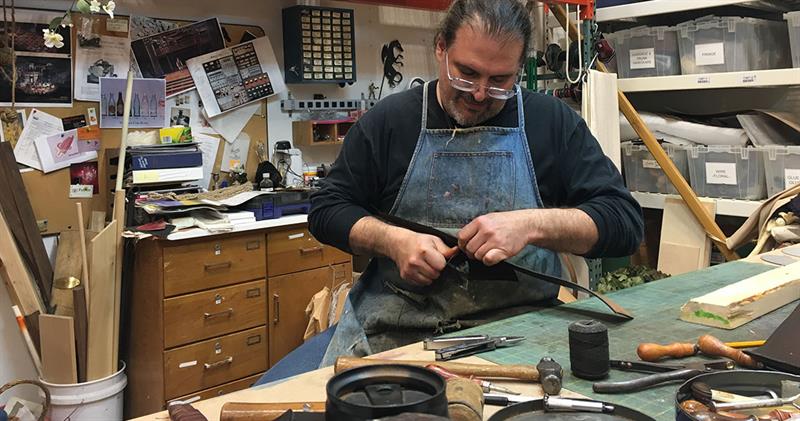 For a production of this scale, the Playhouse hired additional production staff to assist in creating and completing props. Tom Nader, pictured above, was brought on to work on leather baldrics (weapons belts) for the actors to wear with their costumes. 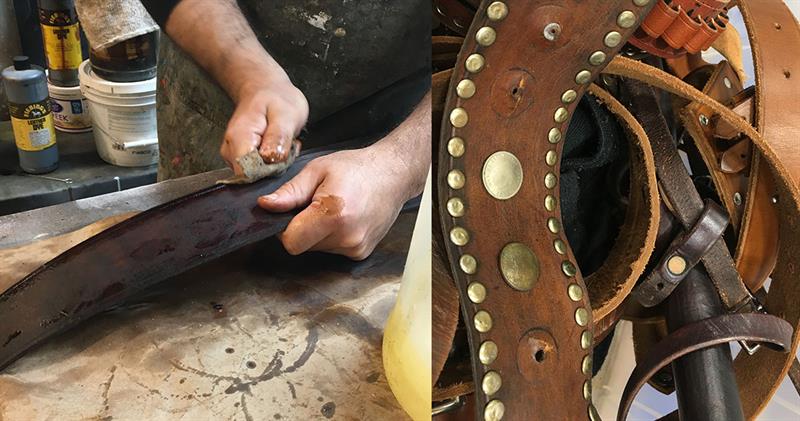 Nader has previously worked with the Playhouse for several years, starting as an intern, then working as a full-time properties employee and eventually as a specialist. He is an historical reenactor, craftsman and builder. Using this experience as his guide, he assisted in interpreting the set designer’s concepts and offered ways to streamline the baldrics so that they stay faithful to the time period while also giving the actors a little more movement onstage. 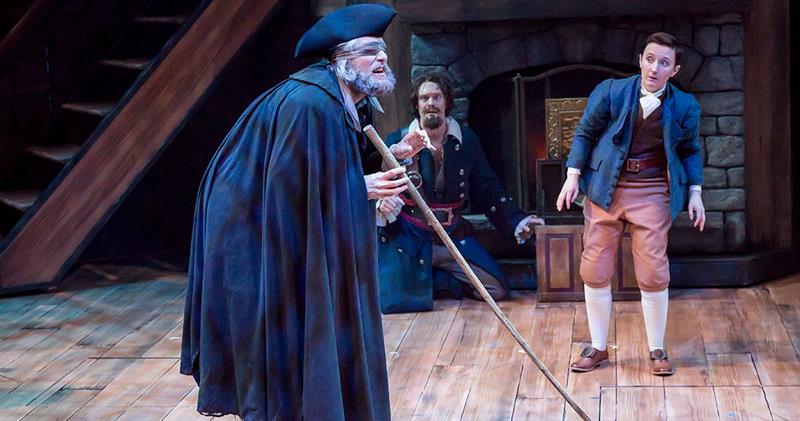 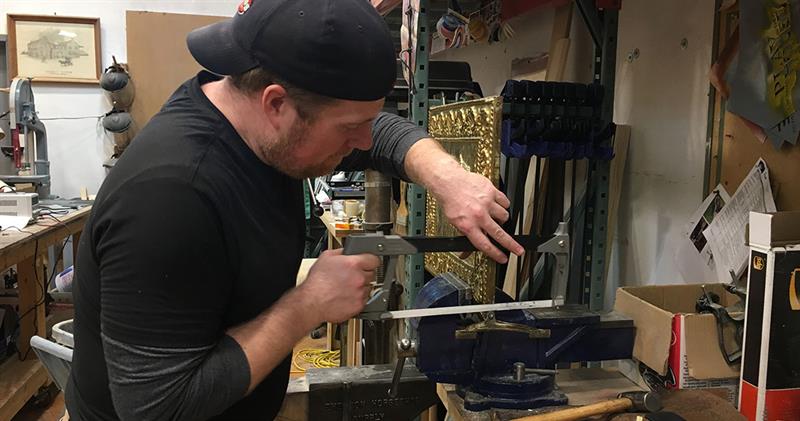 For props that aren’t found in the Playhouse’s own stock, artisans will perform in-depth research to find items that deepen the world of the story. Properties Assistant Jeff Fowee explained that after the department combed through several photos online, they purchased a gold-plated fire screen off eBay to be placed inside the Admiral Benbow Inn, which is the first location of the play. 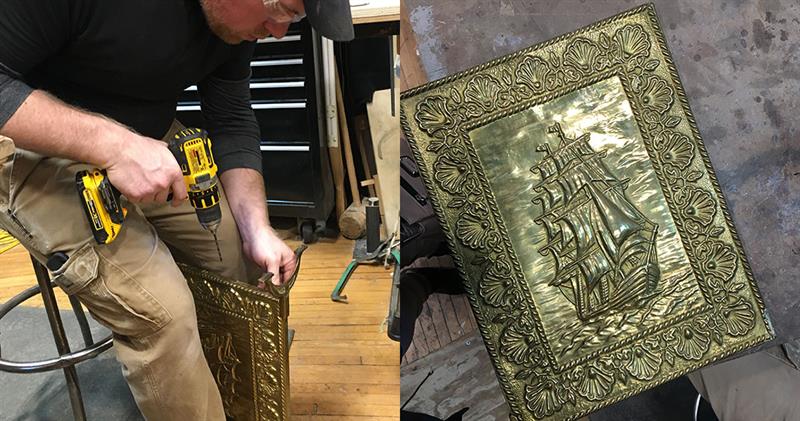 “This type of stuff is in someone’s garage somewhere,” Fowee said, adding that it’s a lot like the show American Pickers. “Our managers cast a broad net and spend a lot of time online finding items. They go through picture after picture, figuring out what’s useful and what’s not, deciding if something fits the period of the story. Then it shows up here and we’re able to get our hands on it and make it fit for our purposes.”

Fowee re-worked the fire screen by removing certain parts and adding more intricate details to give it a more ornate look. 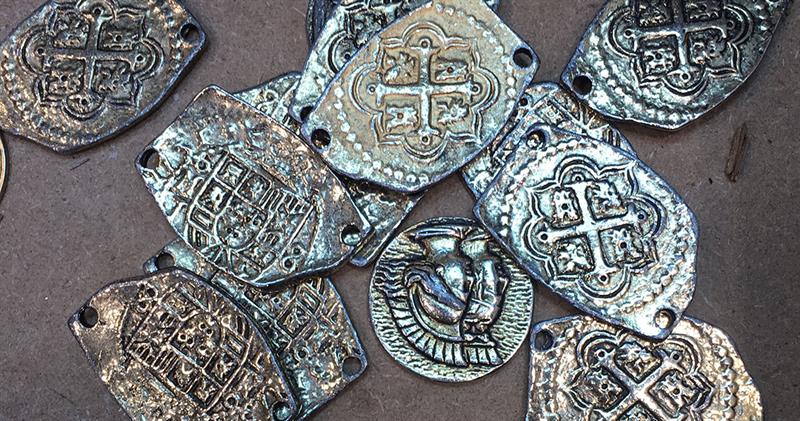 The Playhouse produced a different adaptation of Treasure Island in 1989, which had a climactic treasure reveal. The treasure chest was filled with lighter, plastic coins and jewels, while more authentic-looking coins were placed near the top of the chest. The coins above for this adaptation were sourced from its predecessor and were found in properties’ stock, which means they were, literally, buried Playhouse treasure.