And the Tony Awards Go To...

The Tony Award is one of the entertainment industry’s most coveted awards. It honors the artistry and talent of professional theatre productions on Broadway. The Playhouse has garnered two of these prestigious accolades: The Regional Theatre Tony Award in 2004 and the Tony Award for Best Revival of a Musical for its production of Stephen Sondheim and George Furth’s musical, Company.

The Tony Awards were established in 1947 by the American Theatre Wing to recognize and celebrate excellence in American professional theatre. The program is named after the seminal actress/producer/director Antoinette Perry, who was a founding member of the American Theatre Wing and spent most of her adult life working in New York theatre. Legendary entertainment figures who have won Tony Awards include Arthur Miller, Cole Porter, Eugene O’Neill, Stephen Sondheim, Chita Rivera, Andrew Lloyd Weber, August Wilson, Terrence McNally, Audra McDonald, Quiara Alegría-Hudes and Lin-Manuel Miranda, amongst other theatrical giants.

Take a look at how the Playhouse is part of this esteemed legacy. 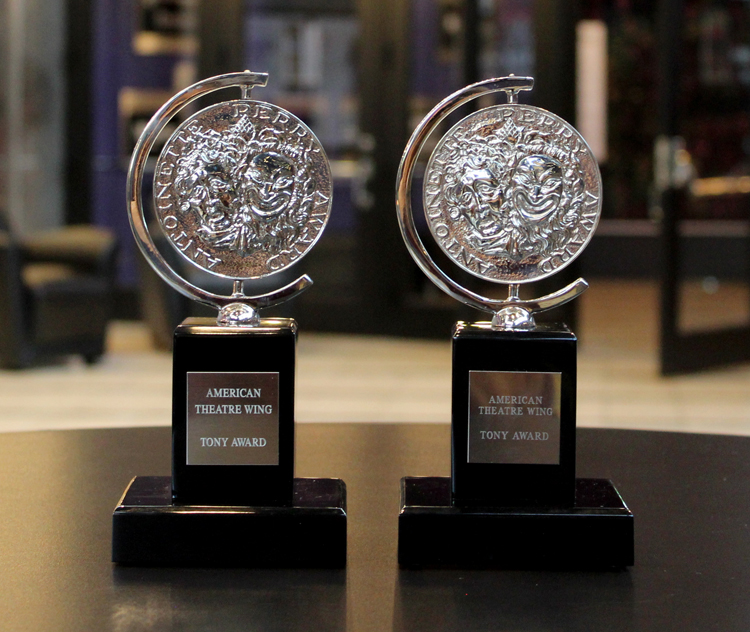 The American Theatre Critics Association proposed to the American Theatre Wing in 1976 that professional, nonprofit regional theatre companies should earn Tony Award recognition. Every year since then, the awards program honors a regional company that has displayed a continuous level of artistic achievement in contributing to the growth of theatre on a national level.

The Playhouse’s win in 2004 marks the first time an Ohio professional theatre company received a Tony Award. In June of that year, Producing Artistic Director Ed Stern and Executive Director Buzz Ward accepted the award in New York on the theatre’s behalf. They returned the next day to Cincinnati, where Playhouse staff, Board members and community members each passed the Tony Award hand-to-hand towards the stage — symbolizing how the award belonged to everyone, as well as the city of Cincinnati. In a feature article with CityBeat, Stern told reporter Rick Pender, “The best thing for me with the Tony was how this community received it. It wasn’t about congratulating Ed Stern. It was, ‘Isn’t it great what we did?’” Ward added in the same article, “It really took all of us, everyone working in the same direction, to even get to the level of consideration.”

The ceremony at the Playhouse had about 500 people in the audience, and the cast of Sing Hallelujah!, who had been performing in the Sheltherhouse Theatre, entertained the crowd with a performance of “The Best is Yet to Come.” Even more festivities followed when the Playhouse hosted a special open house event in August, in which subscribers and community members could see the Tony Award up close, get a tour of Playhouse memories and history over the years, and celebrate the opening of the 45th Anniversary Season. 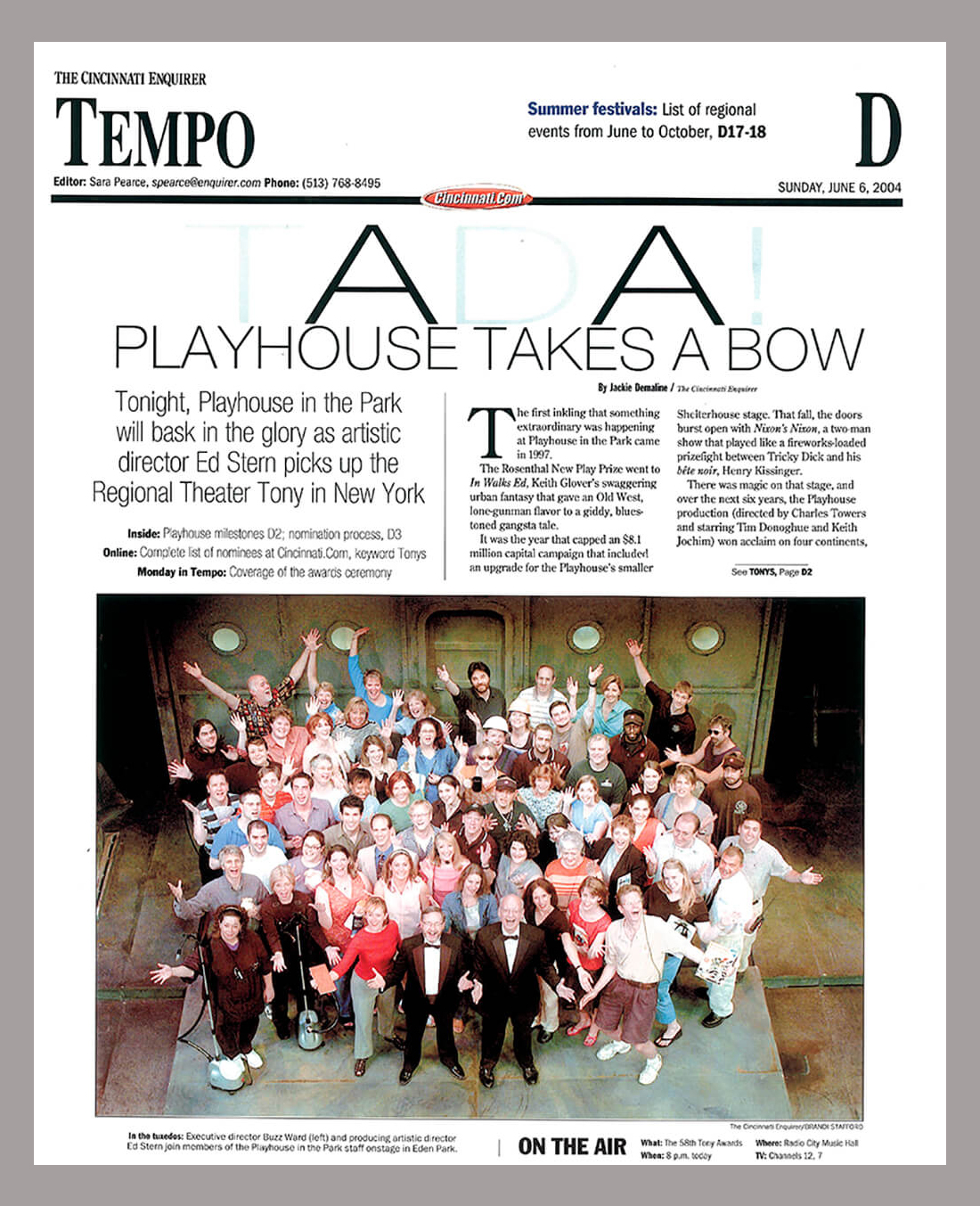 Click the photo above to view the image at a larger size.

• No theatre has won the Regional Theatre Tony Award twice, “testifying to the growing strength of professional theatre nationwide,” according to the American Theatre Critics Association.

• Among other regional theatres who have won the Regional Theatre Tony Award are Arena Stage in Washington D.C., Actors Theatre of Louisville in Kentucky, The Guthrie Theatre in Minneapolis, and Cleveland Play House in Ohio. Each of these companies has collaborated with the Playhouse to team up and co-produce theatre productions over the years. 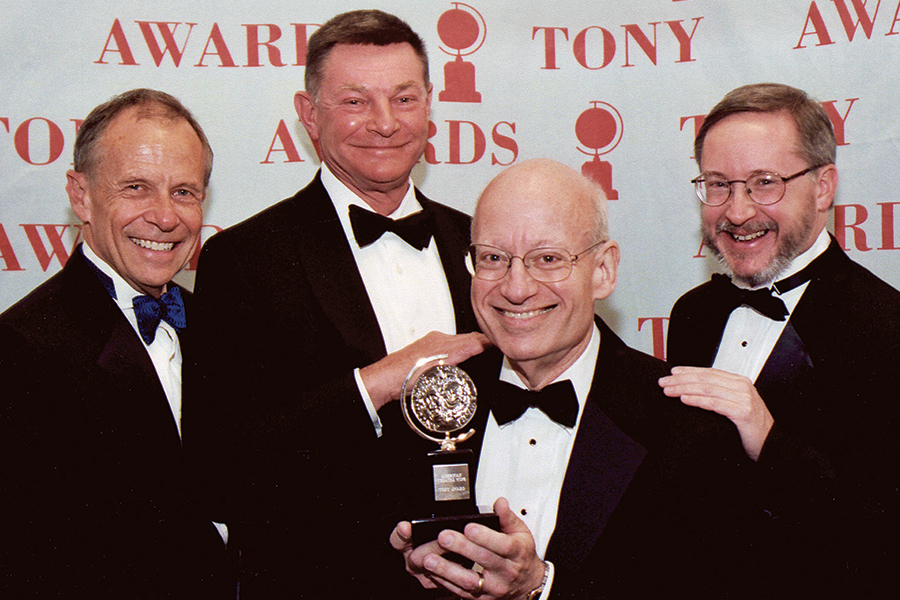 2007: Best Revival of a Musical, Company

Stephen Sondheim and George Furth’s musical Company debuted in 1970. It follows New York bachelor Bobby, who, through a series of vignettes, learns the pains and pleasures of romance, marriage and dating from his friends. It’s set against a musical backdrop of memorable showtunes like “(Not) Getting Married Today,” “Ladies Who Lunch” and the emotionally climactic “Being Alive.” The Playhouse’s production was directed by John Doyle and music-directed by Mary-Mitchell Campbell, and it starred Broadway veteran Raúl Esparza as Bobby. In a departure from the musical’s traditional approach, Doyle cast the ensemble as both the characters and the musicians to bring the story to life. This artistic vision was a follow-up to his 2005, Tony Award-winning revival of Sweeney Todd, in which the cast was also the orchestra.

Before Sweeney Todd went to Broadway, it performed on London’s West End in 2005. Stern and Ward attended a matinee performance of that show and had dinner with Doyle afterward. In a 2006 issue of the Playhouse publication Prologue, Ward paraphrases that conversation: “At this point, John’s London production had garnered enough interest from New York producers that most of his conversations with people on this side of the pond centered on which producer would put Sweeney on Broadway. Ed posed a different question to John: What Sondheim show would he be interested in directing next, using his unique style of having the actors double as the orchestra?” The answer was Company. 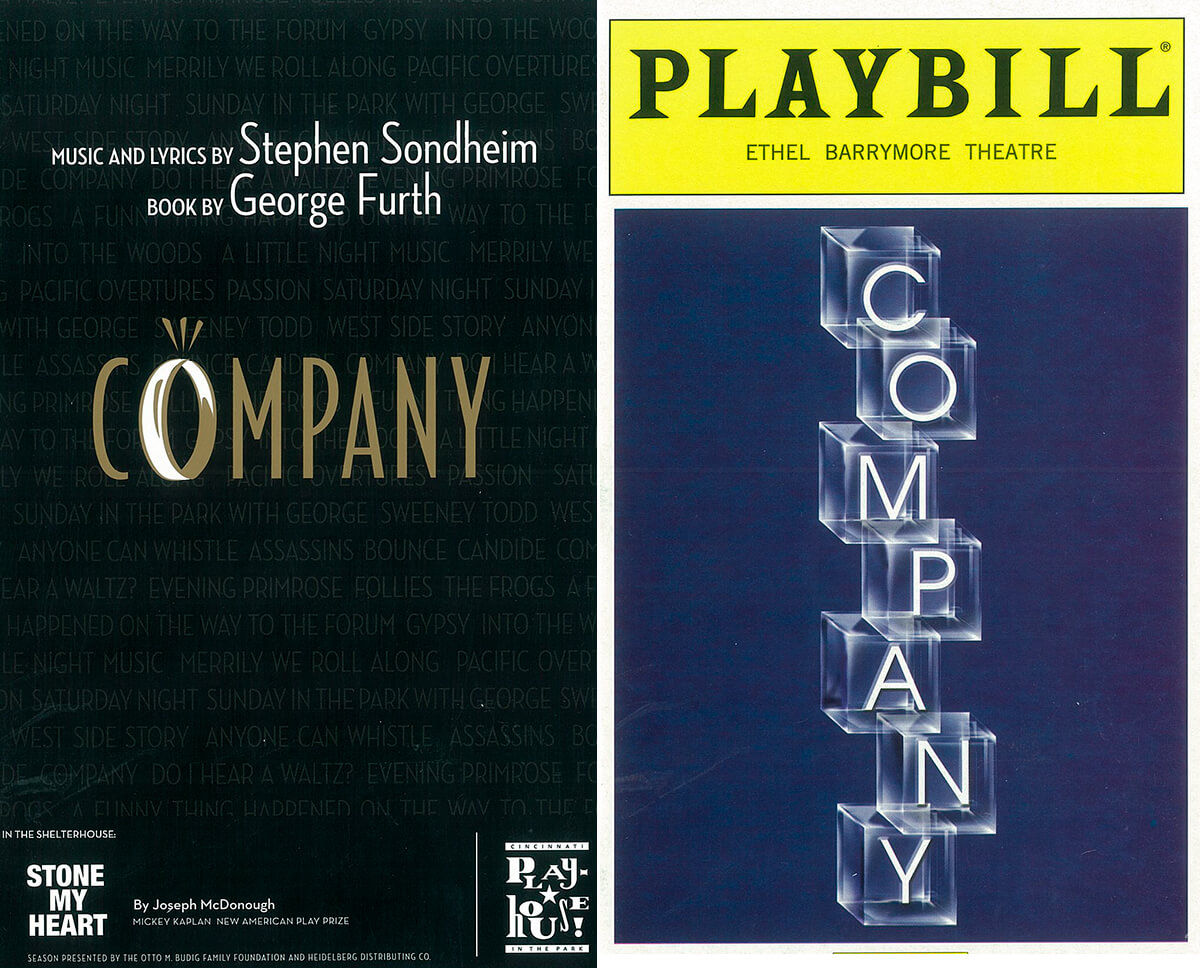 Playbills from the Playhouse and Broadway runs of Company. 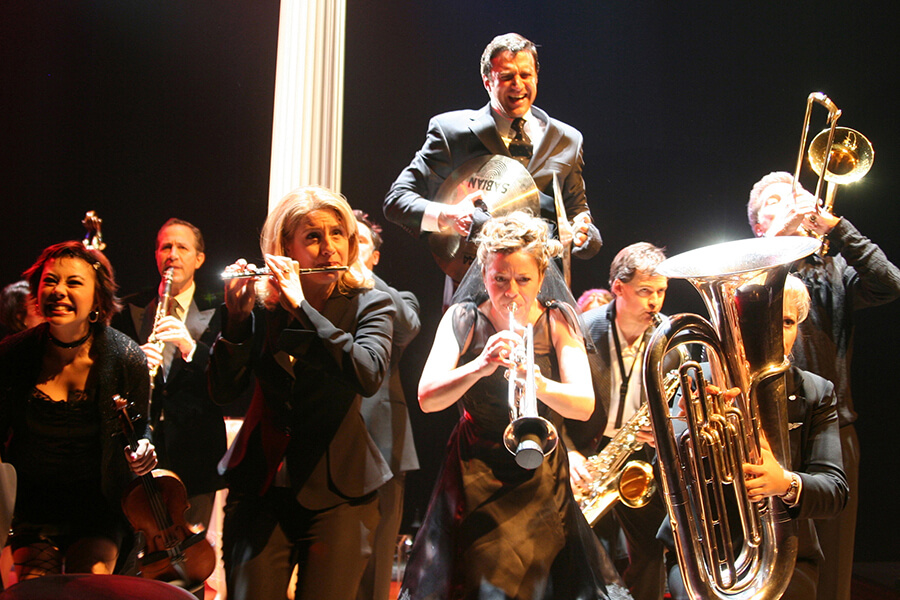 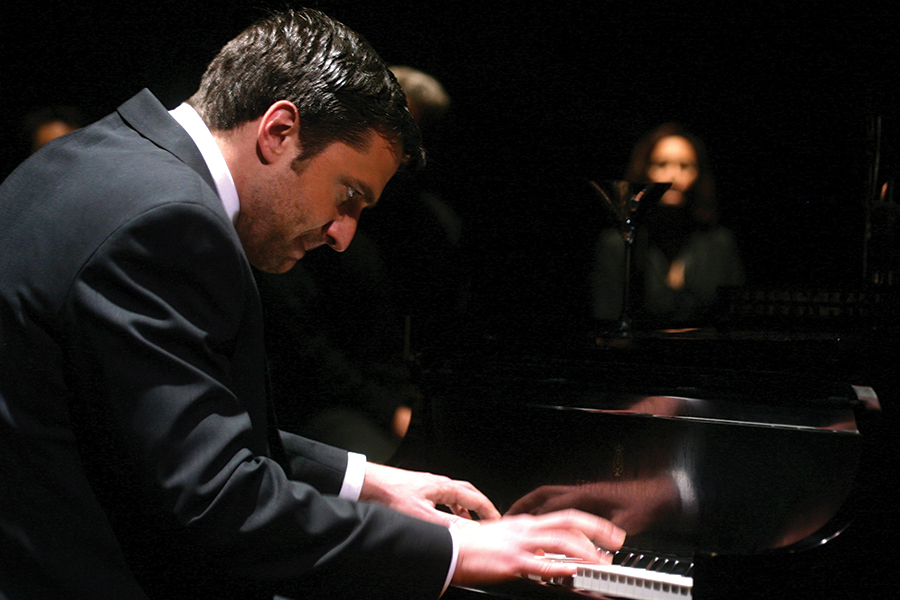 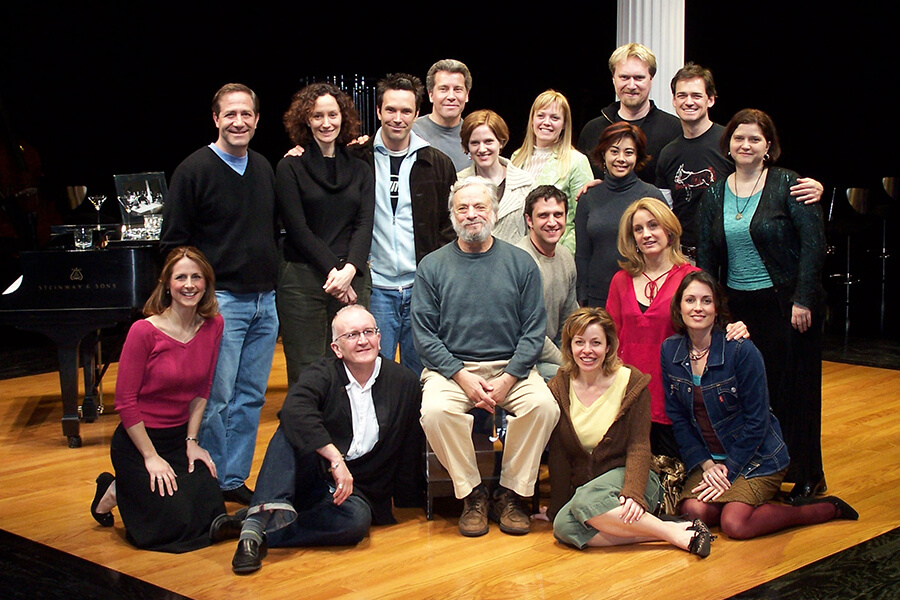 Stephen Sondheim (center), with Director John Doyle (front) with the cast of Company at Cincinnati Playhouse in the Park. Photo by Buzz Ward.

Timeline: From the Playhouse to Broadway

• January 2006: Rehearsal for Company begins at the Playhouse.

• March 2006: Sondheim makes a special visit to Cincinnati the attend the first preview performance. He meets with the ensemble, production crew and theatre staff. Company opens on March 16 in the Marx Theatre. It enjoys standing ovations from the audience and critical praise from CityBeat, The Enquirer, Talkin’ Broadway and TheaterMania. Broadway producers travel to Cincinnati to scout performances of the musical.

• April 2006: The producers of Doyle’s Sweeney Todd announce they will bring his Playhouse production of Company to Broadway in the coming season. Company closes in the Marx Theatre on April 14.

• September 2006: Company rehearsals begin at Broadway’s Ethel Barrymore Theatre and include the same ensemble as the Playhouse production. The Playhouse and Company receive national press coverage from The New York Times and New York Magazine in a series of fall preview arts articles.

• May 2007: Company receives Tony Award nominations for Best Revival of a Musical, Best Director of a Musical (Doyle) and Best Performance by a Leading Actor (Esparza).

• June 2007: Company takes home the 2007 Tony Award for Best Revival of a Musical on June 10. Two performances of Company are filmed with 13 cameras on June 30 with the hope of being aired on PBS. 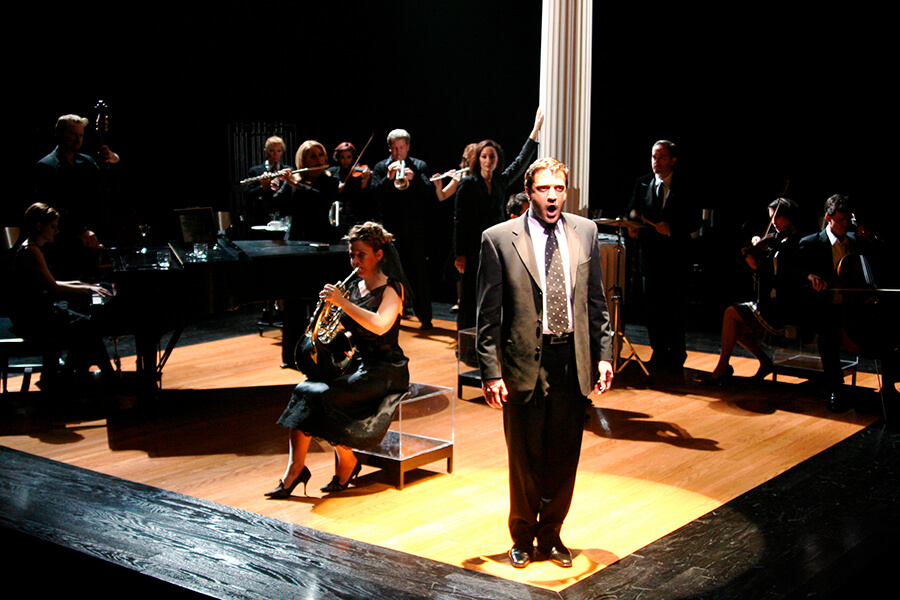 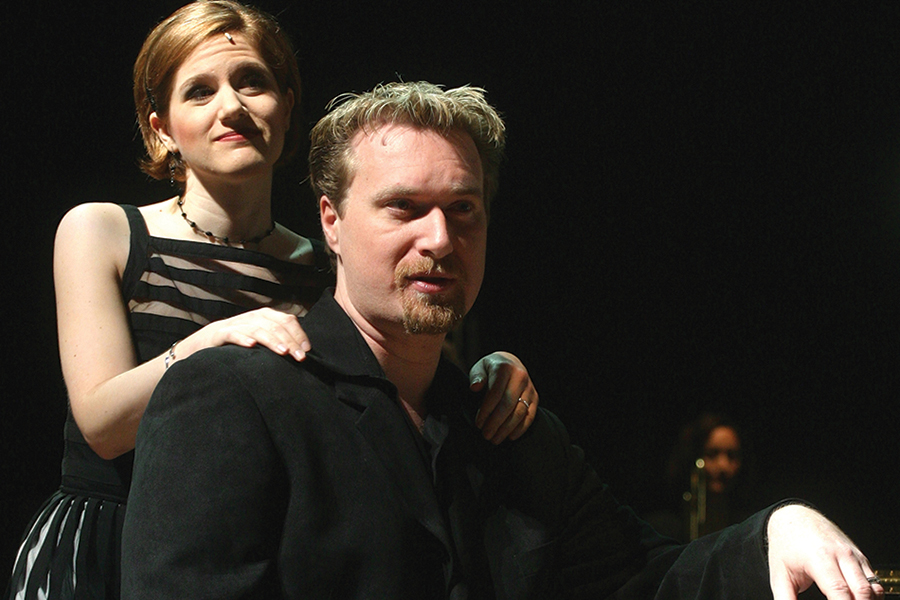 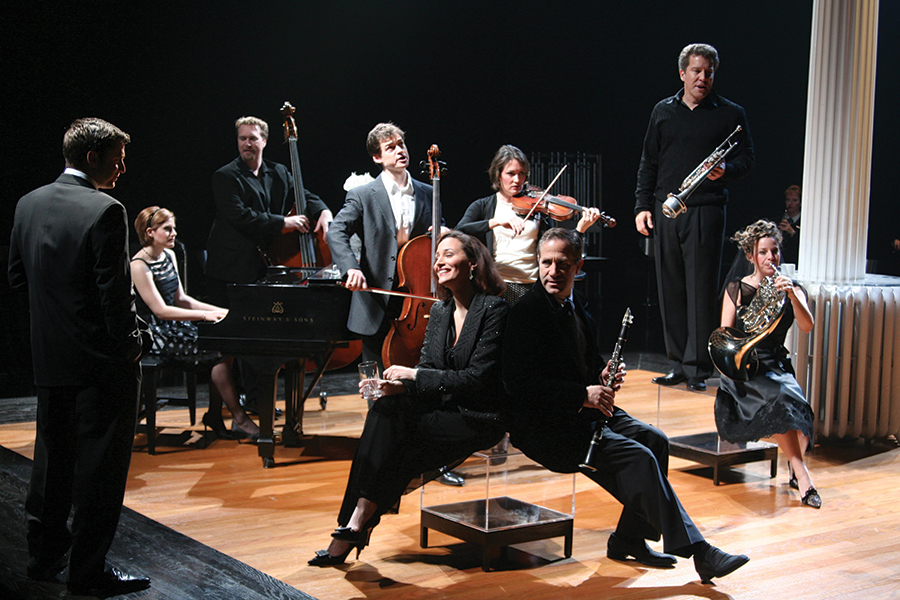 • When Sondheim made his visit to Cincinnati in 2006, he intended to only stay for the first preview performance. He was so pleased with the show that he stayed for the second preview the following night.

• Doyle’s subsequent Broadway directing credits include A Catered Affair, The Visit and The Color Purple. In 2016, The Color Purple won Tony Awards for Best Actress in a Musical (Cynthia Erivo) and Best Revival of a Musical. Today, Doyle serves as Artistic Director of Classic Stage Company, an esteemed off-Broadway theatre.

• Company’s music supervisor and orchestrator Mary-Mitchell Campbell was already a highly respected music director in New York theatre at the time of the production. She has since worked on the Broadway productions of The Addams Family, Big Fish, Finding Neverland, Tuck Everlasting, Kristin Chenowith: My Love Letter to Broadway, Mean Girls, The Prom and Kristin Chenowith: For the Girls.

• Esparza has performed regularly on Broadway, including roles in Cabaret, Taboo, Chitty Chitty Bang Bang, The Homecoming, Speed-the-Plow, Arcadia and Leap of Faith. From 2012 to 2018, he played a supporting role as Rafael Barba on Law & Order: Special Victims Unit. He has also performed in numerous television episodes of Hannibal, The Path and BoJack Horseman. • In April, Esparza corralled a star-studded roster of Broadway and screen stars to perform in a virtual birthday celebration for Sondheim, in light of COVID-19 quarantine circumstances. The event, titled Take Me to the World: A Sondheim 90th Birthday Celebration, featured at-home performances of favorite Sondheim showtunes. Performers included Patti LuPone, Meryl Streep, Mandy Patinkin, Sutton Foster, Bernadette Peters, Aaron Tveit, Brian Stokes Mitchell and more. The event took place on April 26 (marking the 50th anniversary of Company’s opening night in 1970) and was hosted by Esparza. You can watch the event for free here: https://www.youtube.com/watch?v=A92wZIvEUAw