Share
All the Roads Home playwright Jen Silverman took time before the show went into rehearsal to talk about her inspiration for the story, the script’s unique structure and when she knew she’d be a writer. 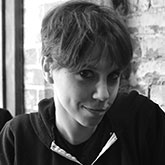 Where did the idea for All the Roads Home originate?

I was doing a winter residency at the MacDowell [Colony, the nation’s leading artist colony] when I wrote the first draft. I’d been trying to write something about mothers and daughters all autumn, but it hadn’t been gelling. I’d been thinking a lot about lineage and family in general, and particularly how the female lineage of mothers and daughters is impacted by changing times and changing cultures. How certain things that are so commonplace for me today would have been unimaginable for my grandmother — I don’t even mean technology in and of itself, but also modes of thought and identity. I kept writing pages and throwing them away, and then somehow it all came together in a concentrated time at MacDowell, when I could write all night every night for weeks.

The play is structured in three segments. Was that structure part of the original concept, or did it evolve over time?

That structure was one of the few things I knew about the play from the start. It felt very important to explore certain ideas and experiences across generations, looking for the linkages as much as the differences.

The play features themes of homecoming and identity while exploring the relationship between mothers and daughters. What is it about the mother-daughter dynamic that interested you?

I come from a family of strong-willed and iconoclastic women. My grandmother was famously stubborn, a German immigrant who (I’m sure) needed every ounce of her stubbornness to make a life here. When I was a kid, I was often told that I’d inherited my stubbornness from her. Now that I’m older, I often wonder what she would make of my life — my own set of resistances to what is expected of me, the pushbacks or subversions that are so much a part of my artistic practice. I always find it fascinating to talk to my mother and see what she reacts to, and how. She’s such an independent thinker, but she was raised with a set of pressures and norms that I wasn’t. I’m interested in conversations about family and transformation in general, but I think that conversation gets particularly interesting when you consider the parameters women operate under, the space that women were allowed to take up “back then” and the way they resisted restriction (or couldn’t) vs. those same things now.

All the Roads Home is a play with music. For you, what is the important role that music plays in telling this story?

Music is one of the connective threads of the play. In part, it helps disrupt or complicate the play’s relationship to time. For example, we hear the granddaughter’s music even in the beginning of the play, when we are technically in the grandmother’s teenage years. For me, this helps inject a certain kind of circularity into the audience’s relationship with time. In terms of the characters — there’s a joyfulness and exhilaration and freedom as the granddaughter comes into her own. I wanted to invite an audience to share this feeling, and I think it’s easier to get there through her relationship to music.

When did you know that you wanted to be a writer?

Always. I never had any doubts. The surprises have been certain forms and genres of writing that I never thought I’d participate in. Theatre was a big surprise, since I assumed I’d be a novelist.

You’ve said in the past that you want to do something different with each new play. What’s next?

I’m beginning work on a commission for Manhattan Theatre Club called The Men in the Dark Always Have Knives. It’s a dark, provocative comedy about epigenetics — which I’ve certainly never done before.

What do you hope audiences will take away from All the Roads Home?

First, I want audiences to feel welcomed and have fun. When we talk about plays that deal with lineage and history, sometimes it can sound like they’re a little punishing. In All the Roads Home, the women of all three generations have instincts toward trouble … and sharp senses of humor. (Max’s imaginary friend is Dolly Parton, who joins us as a character at one point.) So I think audiences will laugh, and I hope they’ll enjoy the ride. I also hope that the play encourages people to think about their own families: what they feel connected to, what they’ve had to reinvent for themselves. The play follows three women, but I think on the whole it’s fairly universal.

To learn more about the Playhouse production of All the Roads Home, visit the production detail page.