Playwright Larissa FastHorse tells us more about crafting The Thanksgiving Play and setting the table for plenty of laughs.

A Q&A WITH LARISSA FASTHORSE 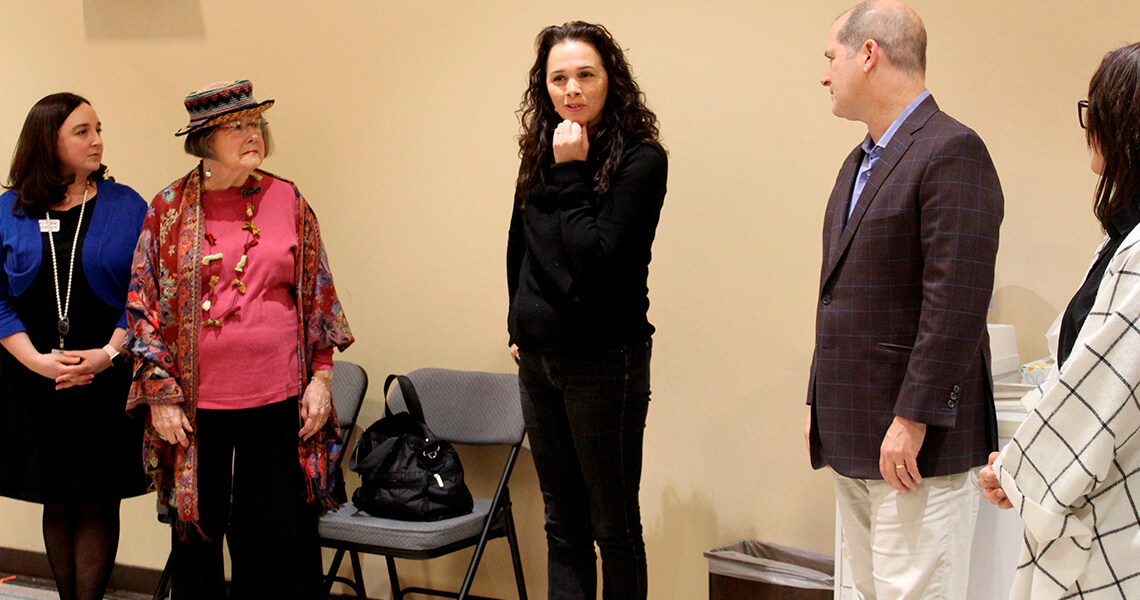 
Tell us about how you began this story. What inspired you to write it? How has it evolved from its first draft?

I was at the Tyrone Guthrie artist retreat in Ireland, and I had two weeks to write a new play about anything I wanted. As a Native American female writer, I am inherently political by the existence of myself as a member of a sovereign nation within a conquering nation and being female in a patriarchal society. So, I do like to tackle those themes and issues that I’m dealing with and that I’m seeing in my life, but I also like to tackle them in ways that are not just theatrical but also broadly acceptable and palatable.

I did a ton of research before I got to Ireland, especially on [the history of] Thanksgiving. It’s such a charged holiday, and I think most people aren’t aware how charged it is for Indigenous people in this country. Unfortunately, more and more in my career, I see theatres and well-meaning, great people choose to do nothing rather than make a mistake. That’s really scary and upsetting to me. Rather than saying, “Hey, I’m a complete idiot, help us do this right,” they kind of fumble forward or do nothing. And those are two things we deal with here in the United States all the time as Indigenous people.

I’m really fortunate that a lot of theatres commission me to write plays and they produce my plays, which is awesome. But the problem I hear again and again is my plays, after they’re produced once, they don’t get reproduced. The number-one reason I hear is because of casting; theatres just claim they don’t know any Indigenous actors, or they cannot afford to bring in Indigenous actors. I believe that America is not done needing to hear about Indigenous issues and stories. But I didn’t want to continue to fight, so I said, “Fine, I have two weeks of my fellowship, I’m going to write a play straight through that is entirely about Native American issues that does not necessarily use Native Americans.” That’s the challenge I put out for myself. Fortunately, I really like the play that resulted. And I’m half-white, so I’m honoring my white half for the first time.

It has largely remained intact from the beginning. Structure- and character-wise. Originally, it was all set in Los Angeles with L.A. characters, so the first reading at University of California-Berkeley was of course very applicable to that audience because they are in California and they felt very connected to those characters and they knew their culture very well. After reading it in other states, I realized it was letting the audience off the hook to make it L.A. actors because they can all laugh and say, “Well, that’s Los Angeles, they’re crazy anyway, that’s not us.” That was the biggest change.

However, finding the balance of satire and comedy has been an endless calibration. And comedy is so technical, it completely changed once I started getting audiences involved and evolved for a long time. 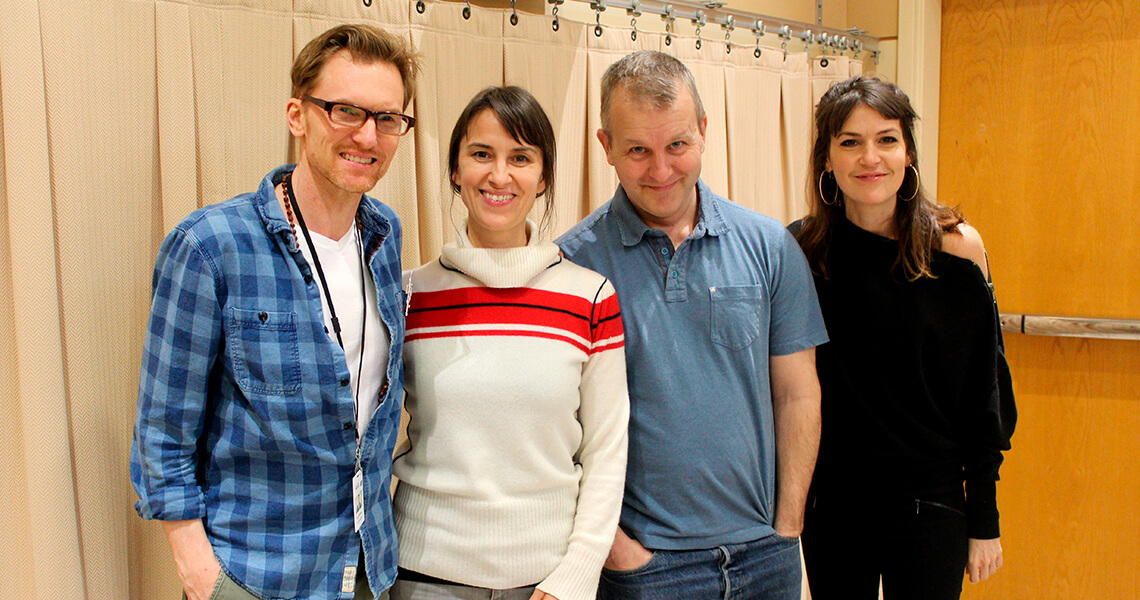 
This play features richly crafted characters in Logan, Jaxton, Caden and Alicia. Each of them is written so specifically, you could probably point them out in a crowd. Where did you draw inspiration when creating them? How do you hope audiences will perceive them?

I live in Santa Monica, so… But I also work in a field of these folks. I am these folks in so many ways. We are all trying to do well but often doing worse. (Just me again?) Everything in this play has been said at some time in my life — only here it is all condensed into 82 minutes and actually toned down because the truth of the crazy things people say doesn’t sound real.

I’m Logan in so many ways, so, like her, I really admire Alicia. Alicia is so honest and comfortable in her skin. She is a survival animal that does things we could (should) criticize, but she’s working within the circumstances she’s been given and making herself successful in spite of it. Everyone finds different things they identify and admire in each of these characters and things that really make them cringe. That’s a perfect reaction.

What sort of conversations do you envision audiences having after they see this play?
I always say that when my plays “end,” that is only the first act. The second act happens afterward in discussions in the theatre, on the way home and hopefully the next day. My goal is to help you change your thinking patterns, and that doesn’t happen instantly. My plays always ask more questions than they answer. Everyone is going to have very different things to talk about after this one, but as long as you are talking and thinking, I am happy!

To learn more about the Playhouse’s production of The Thanksgiving Play, visit our production detail page.

Join us for these upcoming events surrounding The Thanksgiving Play! 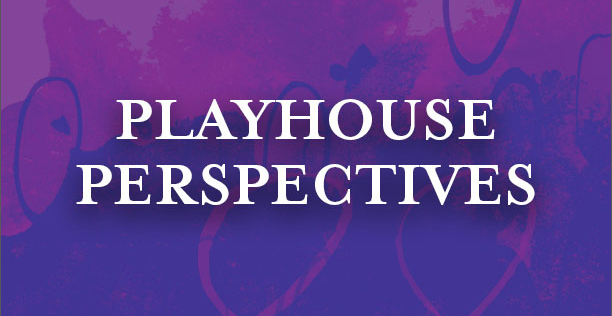 A CONVERSATION WITH LARISSA FASTHORSE
Sunday, March 24 | 5:30 p.m. at the Playhouse
Join us for a conversation with The Thanksgiving Play playwright Larissa FastHorse, facilitated by the show’s director, Lisa Portes. Learn about how they are bringing this fresh, new satire to life on the Shelterhouse stage, and take a deeper dive into the story’s perspective. Portes will also engage in discussion with FastHorse about her career as an award-winning theatre artist and her experiences navigating the industry as a Native American playwright. 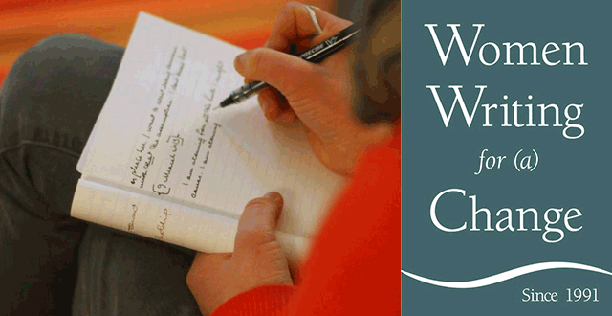 WOMEN WRITING FOR (A) CHANGE WRITING CIRCLE
Monday, April 15 | 7 p.m. at the Playhouse

The Playhouse is thrilled to be teaming up with Women Writing for (a) Change to help you connect your own story and writing style to the themes of The Thanksgiving Play, written by Larissa FastHorse. Join us for a guided writing experience to help you merge ideas of representation and cultural identity with your personal response to FastHorse’s new satire. Whether you have never put pen to paper or you’re an experienced storyteller, come cultivate your voice and connect with a new community creatively.

These events are free and open to the public, but registration is required by calling the Box Office at 513-421-3888 or visiting our Events page.

The Playhouse Perspectives series is supported by a generous grant from Roderick and Barbara Barr.