Once on This Island is an enchanting musical fairy tale that takes place on a Caribbean island called “the jewel of the Antilles.” In the opening scene, a group of people huddle together in the middle of a terrible storm. To soothe each other’s fears, they begin to tell the story of Ti Moune — a peasant girl who tempted the will of the gods in order to save the boy she loves. Through joyous lyrics, spirited movement and an uplifting score, Once on This Island pays homage to the cherished tradition of storytelling in the West Indies.

Whether it’s sharing stories around the dinner table or making an extravagant show of a well-known tale, storytelling is integral to Caribbean cultural identity. Stories carry lessons of cultural and social value, tell various chapters of shared history, and entertain through an immersive communal experience. Listeners may have often heard different variations of the same tale, but even still, the speaker is expected to play up their story through song, dance and different forms of theatricality.

The story of Ti Moune may be fictional (in fact a retelling of Hans Christian Andersen’s The Little Mermaid), but Caribbean and West Indie culture have a seemingly endless amount of folklore to explore. 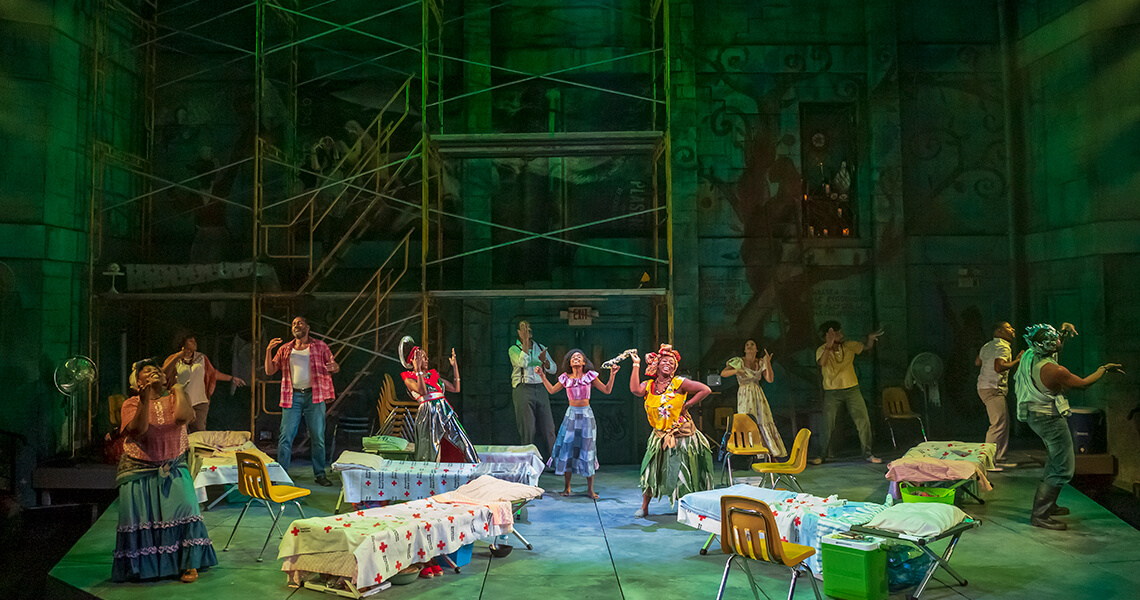 One of the most common parts of Caribbean folklore is the duppy (also called jumbie), which means ghost or spirit. They’re generally considered malevolent spirits that wreak havoc on humans, whether it’s an everyday irritation or a significant, life-changing event. However, some believe that not all duppies are evil in nature and may in fact contain important meaning for whomever they’re haunting. Like the ghosts of North American ideology, duppies represent the souls and spirits that are stuck between the worlds of the living and the dead. Various superstitions are followed to deflect or ward off duppies.

Perhaps more than any other figure in Caribbean folklore, Anansi is most widely known. Many different ethnic groups are familiar with Anansi stories (also called Nancy stories), though their origin lies in West Africa. Anansi means spider, derived from the Ashanti culture of Ghana, and he is a clever, quick-witted trickster who enjoys playing mind games on humans. He is considered the “king of stories” who has a great depth of knowledge and wisdom but has no tolerance for boredom. If one wanted to call upon spirits to help them tell a tale in a truly entertaining way, they would want to summon Anansi by offering him treats, smokes and liquor. 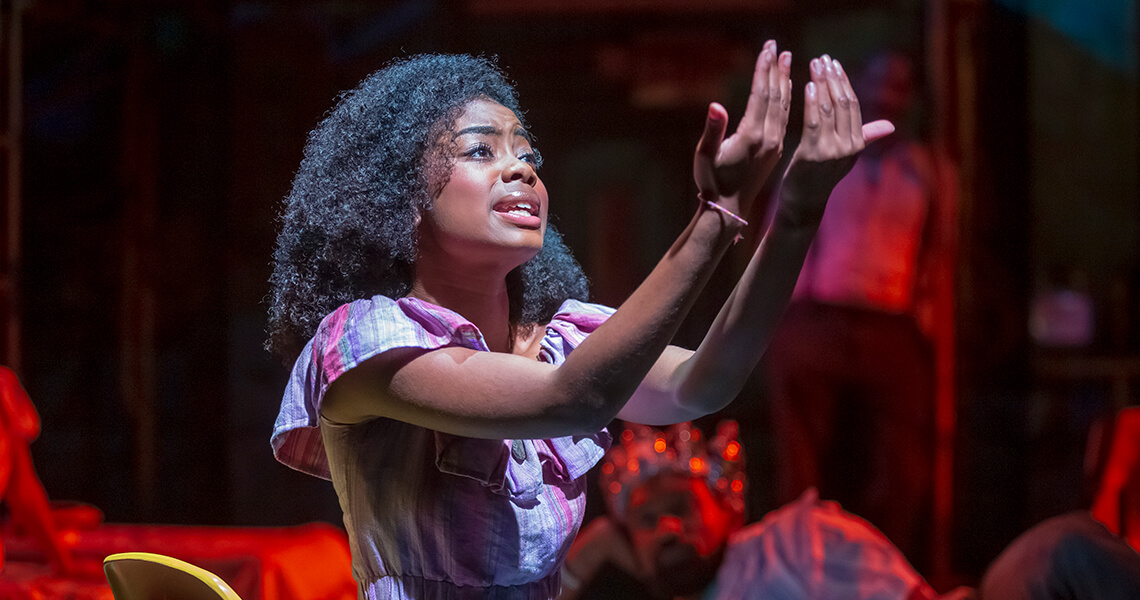 Ti Moune (Lauren Chanel) and Agwe (Allan K. Washington, background) in Once on This Island. Photo by Mikki Schaffner.

Mami Wata is a highly regarded spirit whose name means “Mother Water.” She has African-Atlantic origins, and she symbolizes the many sacred and spiritual qualities of water. Often considered a divine element, water represents the mysterious connection of life in the natural world and the spirits of the afterlife. As such, Mami Wata as a spiritual symbol carries many stories and meanings. She is both beautiful and fiercely protective, seductive and dangerous, and generous and vengeful. She often appears with the torso of a woman and the tail of a fish, and sometimes adorned with a snake.

Similar to duppies, duennes are the spirits of children who have died before being baptized and are fated to roam around the earth, unable to fulfill a journey to the afterlife. They engage in a variety of juvenile pranks, fitting for their immature ages. It is believed that they have no faces, their feet face backwards, they have large heads and they wear large hats shaped like mushrooms. They sometimes wander into homes, searching for maternal love, and can be heard crying from other rooms. Folklore dictates that parents should never shout the names of their children in public — when the duennes hear a child’s name, they will call it out, lure the youngster into the forest and abandon them. 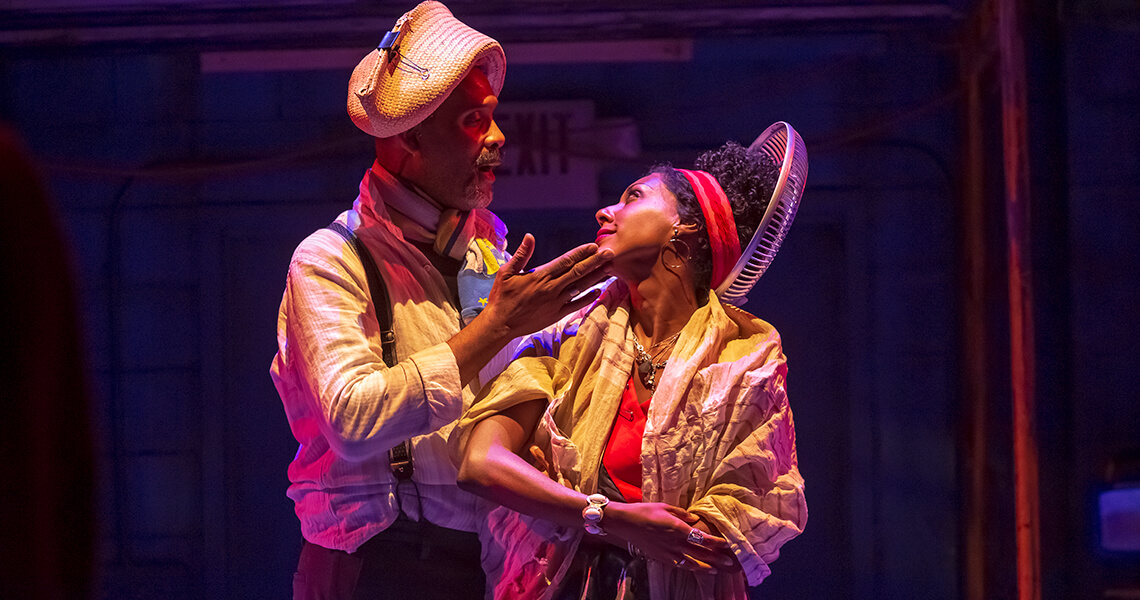 Armand (Ken Early) and Erzulie (Christina Acosta Robinson) in Once on This Island. Photo by Mikki Schaffner.

The chickcharney is a mythical creature that most closely resembles an owl, though it is quite hideous. It lives primarily in the Bahamas. According to lore, the chickcharney is three feet tall, furry, feathered and has three fingers, three toes and red eyes. It is said that should you come across the chickcharney and you treat it with kindness and reverence, the creature will give you good luck. But if you treat it poorly, you’ll be cursed with bad luck and hard times. For good measure, it’s advised that travelers wear brightly colored clothing to bring them luck on the road.

Also known as “Maitre Bois” and “Daddy Bouchon,” Papa Bois is one of the many protectors of the forest. He mainly appears as an elderly man dressed in ragged clothes, but he also appears in the form of a deer. He represents hard work, strength and dedication to the earth. He regards himself as the guardian of animals and trees. When hunters are in the area, Papa Bois will sound a cow’s horn as a warning to those who fall under his protection. He is passionate about his responsibility to the forest and does not tolerate the destruction of the land he oversees.

Gang Gang Sara is a figure who’s most popular in Trinidad and Tobago. Many tales have been told about her, but in each one, she is an African witch who searches for the family she lost when they were taken aboard slave ships. It’s believed that she flew from Africa in the 18th century and settled in an area called Golden Lane where she married a man named Tom and grew to old age. Following Tom’s death, she desired to return to Africa. She climbed a great silk cotton tree to fly, but she no longer could. She tragically fell to her death and never made her return to Africa. It is now believed that cotton trees contain spirits of all kinds as a result.

La Diablesse is a haunting spirit known as “the devil woman.” She dresses in traditional Caribbean garb and wears a long skirt and a large hat that has a wide brim. Her attire makes her look beautiful from afar, allowing her to blend in with humans — but what she’s hiding is a hideous face and a cloven hoof. Traditional folklore says she walks along the roads that lead to different villages, mostly under the light of a full moon, with the intention of capturing the attention of men. If she does so successfully, she lures them away from the road and into the forest where they don’t come out alive.

Photo at top of Ti Moune (Lauren Chanel) and Asaka (Bre Jackson) in Once on This Island by Mikki Schaffner.